The AHA has created an Action Plan that describes four steps to help meet the goal of eliminating maternal mortality and reducing severe morbidity:

This Action Plan incorporates feedback from hundreds of hospital and clinical leaders who serve on AHA’s councils, committees and regional policy boards. The member case studies below highlight how our member hospitals and health systems have worked to implement these actions.

Evaluate and Act On Your Data

Philadelphia-based Penn Medicine improved the health outcomes of postpartum women with hypertension through its Heart Safe Motherhood program by enabling women whose pregnancies were complicated by high blood pressure to take their own blood pressure readings using a cuff provided by Penn as well as a mobile app. As a result, no women enrolled in the program were readmitted to the hospital within seven days of giving birth, compared to a 5 percent readmission rate among women monitored through in-person visits, and 60 percent of participating women reported their blood pressure readings while enrolled.

Services specific to perinatal mental health are sparse in Maryland, and those that exist are often difficult to access. In 2003, Sinai Hospital of Baltimore launched the Perinatal Depression Outreach Program to improve infant and maternal well-being through the identification and treatment of maternal mental health struggles.

The number of infants born with neonatal abstinence syndrome (NAS) has increased as opioid use skyrocketed in the region. Keeping mothers and babies safe in the midst of the opioid crisis in northern New England is the goal of a new online toolkit being tested in eight regional hospitals.

In May 2014, the Ohio Governor’s Office of Health Transformation awarded MetroHealth Medical Center in Cleveland $395,170 in grant funding to reduce lengthy hospital stays and promote improved health outcomes for opiate-dependent mothers and their newborn babies. The funding was a part of a joint partnership between the Ohio Departments of Medicaid and Mental Health and Addiction Services called the Maternal Opiate Medical Support (MOMS) Project.

Spectrum Health’s Maternal Infant Health Program offers personalized services to help mothers and families have a healthy pregnancy and a healthy baby. Augmented by the federally funded Strong Beginnings program, which provides additional services to eligible African American and Hispanic women in Grand Rapids, Spectrum assists with locating health care services, finding transportation, and understanding the baby’s growth and development. The infant mortality among African Americans in Kent County fell by 46% in the past 12 years due in part to the Strong Beginnings community collaborative.

For decades, reducing infant mortality has been a long-standing challenge in the greater Cleveland metropolitan area. During 2015 alone,155 babies in Cleveland’s Cuyahoga County died before reaching their first birthday, giving the county an infant mortality rate of 10.5 deaths per 1,000 live births—almost double the national rate. Even more alarming, the problem was concentrated among African-American families, where the infant mortality rate was three times that of Caucasian babies.

In 2001, a Samaritan Health Services (SHS) physician, Dr. Richard Wopat, recognized the need to improve birth outcomes of high-risk pregnant women in the region. In collaboration with various community and state partners, he started a pilot program in 2002 at Good Samaritan Regional Medical Center to ensure that the most vulnerable pregnant women had access to care and to screenings for special issues including medical, obstetrical, and psychosocial concerns. Today, the Samaritan Maternity Connection (MC) program is now implemented at all five of the SHS hospitals and the three county health departments.

The Institute for Diversity and Health Equity, an affiliate of the American Hospital Association, works closely with health services organizations to advance health equity for all and to expand leadership opportunities for ethnic minorities in health management. We have long believed that promoting diversity within health care leadership and tackling health disparities is critical to ensuring the highest quality of care for everyone.

The Women in Neighborhood Network empowers mothers and their support partners to help thrive along with their babies during the first year. This program piloted an enhanced model of group prenatal care with CHWs and Certified Nurse Midwivers.

Through the use of apps, remote monitoring and video visits, UPMC Magee-Womens Hospital targets prenatal and postpartum hypertension, expands access to maternal fetal specialists and increases patient engagement. These efforts have led to improved clinical outcomes and greater self-advocacy by patients.

The Welcome Baby Program is part of a community network of programs that work together to provide supportive services to families with newborns. Developed in partnership with First5LA, it is a voluntary, universally provided hospital and home-visitation program offered at no cost to pregnant and postpartum women.

Yale-New Haven Hospital (YNHH) demonstrates its longtime commitment to families – especially mothers and children – by providing a variety of wide-ranging programs. Working within its diverse urban surroundings, YNHH partners with parents to support healthy children through initiatives both within the hospital and out in the community.

In Catholic Medical Center’s Mom’s Place obstetrical unit, there has been almost a doubling in the percentage of babies born with neonatal abstinence syndrome (NAS) since 2011. In the hospital’s Pregnancy Care Center, an innovative program named Roots was developed to engage pregnant mothers suffering from SUD so that they can have a safe pregnancy and ultimately deliver an infant who is not addicted.

Partner with Clinicians and Community Stakeholders

Working in the health care field for more than 20 years, Jan L. Ruma, director of the Northwest Ohio Pathways HUB, has witnessed how the highest-risk patients are the least likely to have access to evidence-based interventions. The recognition of that disparity is at the heart of the Pathways HUB model.

The Healthy Beginnings program, in partnership with the Delaware Division of Public Health, brings together preconception care, which identifies and addresses risks to future pregnancy; pregnancy planning to guide women through the critical first steps that can set the stage for a healthy pregnancy; and prenatal care that promotes the well-being of mother and baby from conception to childbirth.

Sixteen years ago, Victoria Flanagan, R.N., M.S., and Michele Lauria, M.D., M.S., became increasingly alarmed as provider after provider closed vaginal-birth-after-a-caesarean (VBAC) programs across northern New England. In their clinical work, Flanagan and Lauria witnessed the burden such closures placed on women. Thus, what began as a collaborative project to investigate the VBAC issue for their master’s degree program evolved into what is now known as the Northern New England Perinatal Quality Improvement Network (NNEPQIN). Today, NNEPQIN consists of 43 organizations throughout New Hampshire, Vermont, and Maine involved in perinatal care, including hospitals, state health departments, professional midwifery organizations, and the March of Dimes.

South Carolina suffers from a high rate of preterm birth, with 11.1 percent of women delivering prior to 37 weeks gestational age. There is also a racial disparity in rates of prematurity, with 14.1 percent of African-American women in South Carolina delivering preterm. To address these issues, Greenville Health System (GHS) partnered with the March of Dimes and the South Carolina Department of Health and Human Services to start implementing CenteringPregnancy group prenatal care at GHS and across the state.

Better Health for Mothers and Babies

Information for Patients and Families 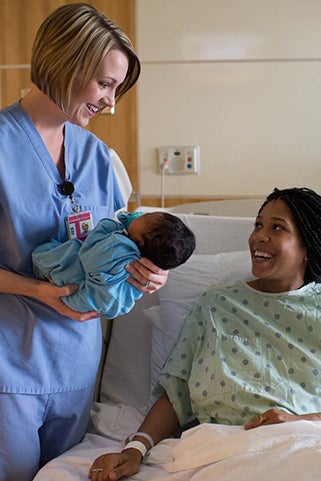