Could Undermine Hospitals Ability to Effectively Care for Patients

The House of Representatives March 9 adopted the Protecting the Right to Organize (PRO) Act of 2021 (H.R. 842). A virtually identical bill is pending in the Senate (S. 420).

If adopted by the Senate and signed by President Biden, the PRO Act would make sweeping changes to the National Labor Relations Act (NLRA) and other labor laws in the United States, including in ways that could have a significant adverse impact on hospitals and health systems as employers.

The bill would codify the Browning-Ferris test issued by the National Labor Relations Board (NLRB) under the Obama Administration for determining joint employer status between two distinct corporate entities. Hospital employers often contract with outside vendors to provide services that are not core to the mission of the hospital, and hospitals often rely on other entities to supplement their staffing, such as agencies providing additional registered nurse staffing. Under the PRO Act, hospitals would be more likely to be considered a “joint employer” of the employees of these third party agencies. Academic medical centers where the hospital and university are separate entities also could be adversely impacted.

Broaden the Test for Employment Status

The PRO Act would codify California’s broad “ABC” test for assessing employee status, thereby requiring many independent contracts to be treated as employees under the NLRA.

Under current law, the complex bargaining required to reach an initial collective bargaining agreement often takes up to a year to complete. Under the PRO Act, the parties would have only 90 days to bargain an initial contract, after which either party could trigger third party mediation and then arbitration. The arbitration panel would be authorized to impose the terms of initial contract on the parties, under criteria set forth in the statute that focus primarily on the employer’s financial condition and the cost of living for employees. Numerous critical factors that often drive hospital labor contracts, such as patient safety and staffing, are largely absent from contract-setting criteria under the PRO Act.

Current law restricts unions from seeking to expand strikes from a primary employer to other, secondary companies with whom the primary employer does business. The PRO Act seeks to limit those restrictions. Given the unique work environment of hospital employers, these changes are likely to lead to more disruption of the patient care environment in hospitals. Moreover, the changes in the PRO Act may create greater risk for disruptions following the transfer of patients to other hospitals in anticipation of a strike.

Penalties under the NLRA are generally limited to NLRB awards of back pay and reinstatement. Under the PRO Act, additional penalties would be imposed for violations of the NLRA, including personal liabilities for corporate representatives found to have violated the NLRA. No additional penalties would be imposed, however, due to violations of the NLRA by union officials.

Raise the Threshold for Finding Supervisory Status under the NLRA

upervisors are excluded from protections under the NLRA. The PRO Act would restrict the definition of a supervisor, thereby expanding the scope of employees who can unionize and seek protections under the NLRA. Many of the leading cases addressing who qualifies as a supervisor under the current law arose in hospitals, often involving the supervisory status of charge nurses and other critical positions that direct the work of other employees. Under the PRO Act’s more restrictive supervisory test, hospitals would have a much harder time demonstrating that these types of employees are supervisors.

Under U.S. Supreme Court authority, employers may require employees to sign pre-dispute arbitration agreements that prohibit class or collective actions in arbitration. The PRO Act would make such provisions unlawful.

The PRO Act would impose significant additional restrictions and reporting obligations on employer consultants, including law firms that advise employers on topics related to unionization. This could discourage consultants and law firms from advising hospitals and other employers on essential labor issues.

During the Obama and Trump Administrations, the NLRB issued varying regulations related to the timing and process of conducting union elections. The PRO Act would codify many of the accelerated procedures issued by the NLRB during the Obama Administration, resulting in expedited union elections. The PRO Act also would expand the scope of information about employees that employers must provide to unions engaged in an organizing campaign. There are serious concerns that hospital staff would lack the time and information to make an informed choice about unionization. In addition, there are concerns that expanding the scope of information available would require hospital employers to disclose employees personal information and provide access to information online, raising serious safety and security concerns about this and other sensitive information hospitals are required maintain.

The PRO Act would change longstanding rules under the NLRA that allow employers to conduct mandatory meetings of employees to discuss unionization.

Strikes in health care settings are often short-term strikes, which under certain circumstances are not protected activity under the NLRA. The PRO Act would expressly authorize unions to engage in a pattern of short term “intermittent” strikes without losing the protection of the NLRA. There are likely to be numerous adverse consequences for hospitals and their patients from such strikes, ranging from increased costs to staffing gaps at critical times that could delay patient care activities.

Currently, alleged unfair labor practices must be pursued through the NLRB. The PRO Act would allow charging parties to file a private claim in federal district court to pursue alleged violations of the NLRA.

Injunctions against employer violations of the NLRA could be pursued on an expedited basis in federal court. 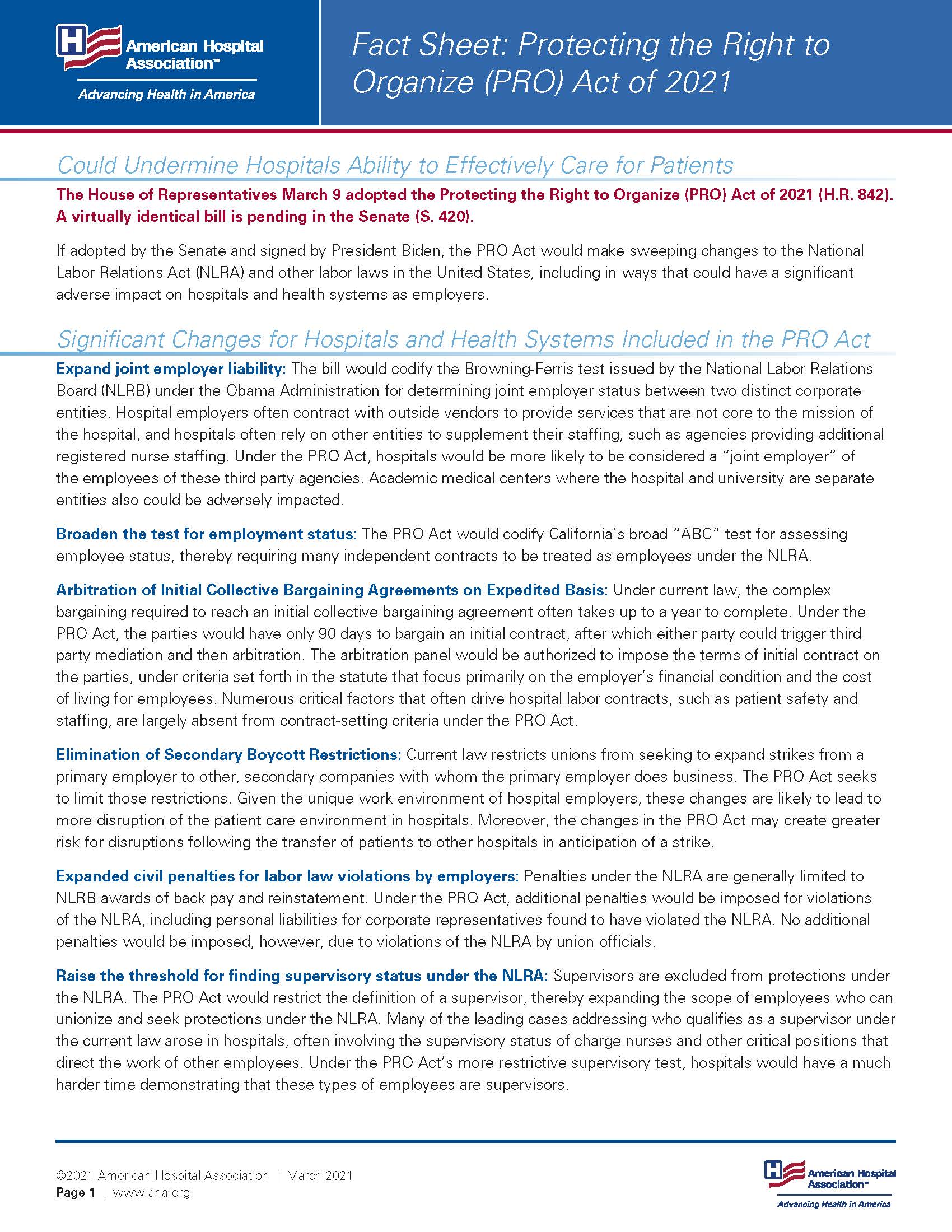