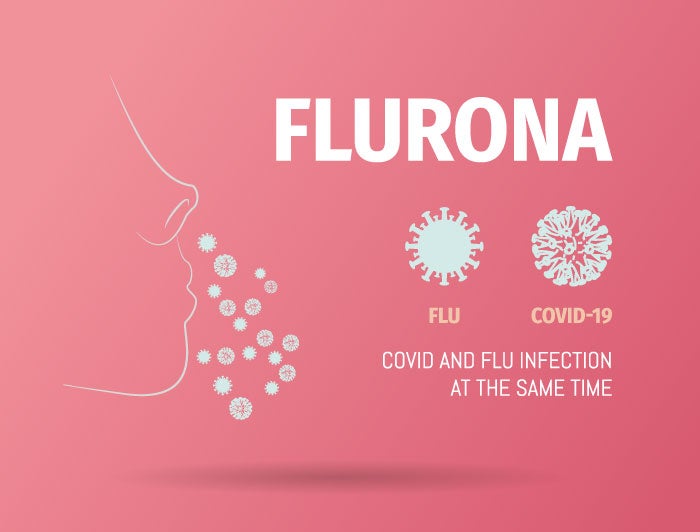 “Flurona” is a term coined in late 2020 by the Israeli Outbreak Management Advisory Team to describe the potential for contracting the flu and COVID-19 simultaneously. An unvaccinated teenager in Los Angeles was diagnosed with flurona on Wednesday, January 5, 2022. Others also have tested positive for both the flu and COVID-19 in Texas and Florida, and before that in Israel, Brazil, the Philippines and Hungary, according to media reports.

According to an article published in Frontiers in Medicine, the frequency of influenza co-infection among COVID-19 positive patients is 0.4% in the United States. Health officials across the country agree co-infections are not unusual when there is an intense transmission of pathogens in communities, such as COVID-19 and flu.

How do you know if you have flurona? It’s difficult to know since many symptoms of the flu and of COVID-19 are similar.

The Centers for Disease Control and Prevention data shows that common symptoms of the flu include fever, cough, sore throat, runny or stuffy nose, body aches, headache and fatigue. Most of those symptoms are the same for COVID-19, with the addition of loss of taste or smell.

While some people are becoming infected with flu and COVID-19 at the same time, Judith O’Donnell, M.D., division chief of infectious diseases at Penn Presbyterian Medical Center, says there’s no need to panic about flurona becoming a new “super virus.”

“The name seems to suggest that the viruses have somehow combined — and that’s not the case. It’s just that a person may get infected with two respiratory viruses at the same time or in short succession,” O’Donnell said in an interview with the NPR affiliate in Pittsburgh.

Co-infections are real and, to those in the medical community, not the least bit surprising. A person can be infected with multiple viruses at the same time — or with a virus and some other type of pathogen, such as bacteria or parasites.

The best way to protect yourself and your family is to get vaccinated. The CDC says it is safe to get a flu and COVID-19 shot or booster at the same time. Penn Presbyterian Medical Center offers a wealth of information about the COVID-19 and flu vaccines. Check out this article on “known — and not-so-known — drawbacks” to the current flu season.